With the 20th year of Texas A&M’s Student Research Week underway March 27-31, take a look back at the top student research stories from the 2016-2017 academic year. For the past year and half, a team of Geography students has worked to collect field data from the fiber cables across the entire campus. But the project didn’t exactly come together in a conventional way. The team’s research question is: “What model can identify open source data that can help forecast the threat actors of the future?” What turned out to be an insect collecting and identification study for Kilpatrick, a junior Entomology major, ended up being part of the study that was featured in a paper by Jason Gibbs of Michigan State University and a species being named in her honor of her new discovery. Providing clean water to those in need is so important to Texas A&M University student Steven Brooke that he pursued an opportunity to serve, even though he was hospitalized at the time. Two “tiny” homes designed and built by students at the Texas A&M College of Architecture will soon house a disabled homeless person and a homeless veteran. Tyler Wooten was a freshman engineering student at Texas A&M University when he came up with an idea that could have a lasting impact on students with visual impairments. Eight months later, his idea — a three-dimensional, tactile map with braille — has come to fruition. Most undergraduate students rarely get a chance to do research in some of the world’s most remote locations alongside some of the top scientific minds, but a Texas A&M University at Galveston student is living the dream at the bottom of the world – Antarctica. 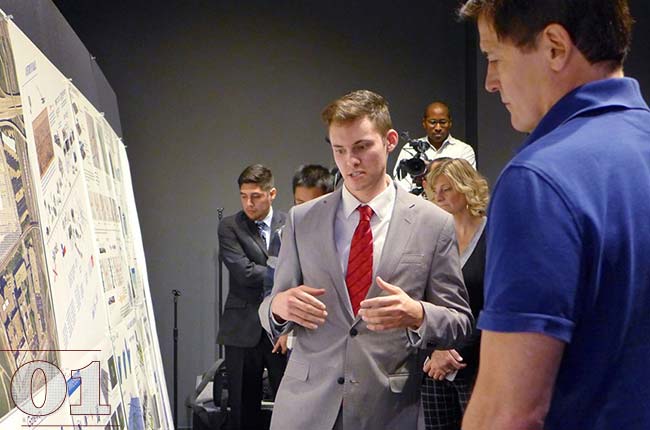 Architecture grad students are designing a state-of-the-art, multipurpose practice facility for the NBA’s Dallas Mavericks, with input from Mark Cuban, the team’s owner, and Bryan Trubey ’83, designer of AT&T Stadium, home of the Dallas Cowboys, and numerous other iconic sports stadiums.